On the 29th March 2019, the United Kingdom is (currently) scheduled to exit the European Union. To celebrate forty-six years of peacetime and prosperity in Europe, this season we’ll be profiling the footballing history of each remaining member of the EU, looking at some of their most iconic matches and the players that have left a lasting impression on the game. We’re headed to another of Europe’s smallest states this week, though with a title like Grand Duchy you’d never expect it to be the least populated country in the European Union. A centre of finance, home of the highest court in the EU, and birthplace of Jean-Claude Junker, this love letter is winging its way to Luxembourg. 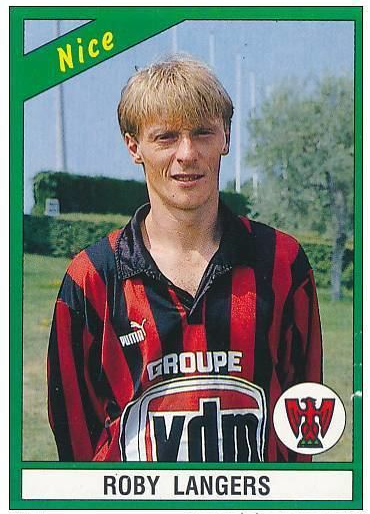 A string of Luxembourgian players have worked their way up the ranks of European football to represent teams in the continent’s top leagues. Jeff Strasser spent seven years in the Bundesliga with FC Kaiserslautern and Borussia Mönchengladbach, while current prospect Leandro Barreiro plies his trade at Mainz. Few, though, have made their mark on European football quite like Robby Langers.

Born in Luxembourg City some four months before Gary Lineker, Langers made his name as a sharpshooter at Union Luxembourg, scoring 26 times before his 21st birthday. That hot streak piqued the interest of some of Europe’s bigger clubs, and Borussia Mönchengladbach would move for the youngster in 1980. After two years of warming the bench at the Bökelbergstadion, Langers moved to France, and would break into the Marseille first team, making fifteen appearances and scoring once in his solitary season at the Stade Velodrome. A season at Metz followed, as Langers became the first Luxembourgian to win the Coupe De France, as Les Grenats overcame AS Monaco in extra-time.

Having failed to cement his place in Metz’s first team, Langers dropped down to the lower divisions, signing for Stade Quimpérois in the Championnat. Those two years in Finistère would equip the striker with the confidence to bounce back into the top flight, and a spell with Guingamp that saw him net fifteen times across forty-four appearances. By now reaching the end of his twenties, Langers was about to hit the form of his life, and would experience a remarkable eighteen months. Joining US Orléans in the summer of 1988, the striker would top the Ligue 2 goalscoring charts at the end of his first season, earning himself a move to Nice in the process. Halfway thorough his first season, at the annual Ballon D’or ceremony, it was revealed that Langers had finished in 23rd place, by virtue of picking up one fifth-placed vote from the judges. While it sounds like a puny achievement, the idea that a Luxembourgian could be named among the best twenty-five players in the world now seems ludicrous. Particularly given that he’d spent most of the year in France’s second tier.

Langers would finish that historic season with 17 goals for Nice, third in the top scorer charts in Ligue 1. Sadly, Les Aiglons were relegated, and Langers would depart the following year for a short spell with Cannes playing alongside a young Zinedine Zidane. The forward’s nomadic career would then take in lower leagues in Switzerland and Germany, before returning to Luxembourg for a season with F91 Dudelange and, finally, a farewell year with his hometown club Union at the age of 39 - a season in which Langers would score a remarkable fourteen goals in seventeen games.

Though less prolific at international level, Langers’ record of eight goals in seventy-three appearances is more impressive when you consider that Luxembourg only scored 26 times in the games that Langers was picked. A goal against Germany in a 3-2 home defeat was perhaps the zenith of his international career, though he was afforded a heroes goodbye in 1998, appearing for a matter of minutes in a friendly against Cameroon before being substituted to a standing ovation.

Perhaps not the most talented player that the Grand Duchy has produced, Robbie Langers’ story is at least the most remarkable. Just don’t mention Guy Hellers…

Younger readers might find it difficult to believe, but there was once a time where it took more than being a team of moderately competent footballers to earn a place at the European Championships. Predictably, given his predilection for progressive thinking and commercial acumen, the idea of a pan-European tournament was the brain-child of Henri Delauney, football visionary and one-man slapstick factory (before becoming an administrator Delauney enjoyed a brief career as a referee, ended after a match in which he swallowed his whistle and had his front teeth broken by taking a ball square in the face). Delauney’s project wouldn’t be realised until three years after his death, but in 1960 Europe’s four best international sides faced off in the inaugural Nations Cup.

Only seventeen sides registered to qualify for that first edition, but when the second tournament rolled around, interest around the continent had been aroused. In 1963, 29 teams took part in three rounds of qualification for the right to take the crown from previous winners the Soviet Union. Since there were uneven numbers, three sides - Soviet Union, as holders, Austria and Luxembourg, for some unfathomable reason - were given byes to the first round proper, as heavyweights such as England, Portugal and Czechoslovakia fell at the first hurdle.

In the First Round of Qualifying, Luxembourg were handed the daunting task of taking on the Netherlands. While this wasn’t exactly the Netherlands of Cruyff, Neeskens and Rensenbrink, the Dutch were at least a half competent international side, in the embroynic stages of their Total Football philosophy. Previously, they’d only been beaten by Luxembourg once, in 1940 friendly, but since then had sent ‘B’ teams to dismantle Die Roten Löwen. In the first leg, things started as badly as expected. Five minutes into the game, Klaas Nuninga, a striker who would go on to win three Eredivisie titles with Ajax, opened the scoring for the hosts, sending 36,000 fans inside Amsterdam’s Olympisch Stadion into raptures. Given the talent at their disposal, the Dutch were expected to rack up a comfortable victory, but in the 33rd minute, Jeunesse Esch midfielder Paul May met Jean Klein’s corner and powered it beyond Feyenoord ‘keeper Eddy Pieters Graafland. The match finished 1-1, and an unlikely upset was on the cards.

Thanks to a lack of suitable venues in their own country, Luxembourg were forced to host the second leg in…the Netherlands, as the De Kuip Stadium in Rotterdam acted as the underdogs’ ersatz home. Having been hammered in the national press after their dismal showing in the first leg, Netherlands coach Elek Schwartz rang the changes, with a completely fresh front three being introduced in a bid to penetrate Luxembourg’s stubborn backline. The minnows themselves made changes too, with Belgium-based engineer Camille Dimmer coming in for goalscorer May. It would prove a stroke of genius.

The hosts sprung out of the traps, taking the game to the complacent Dutch. Dimmer, busy with running up front, struck the first blow in the 20th minute to send shockwaves through Feyenoord’s stadium. The Netherlands hit back fifteen minutes later as Piet Kruiver, a future Eredivisie top scorer, ran through on goal and slotted past Nico Schmitt. Now the momentum was with the so-called away team, and Luxembourg were holding on, desperate to force a replay. The Dutch, though, were too cocksure. Instead of going for the kill, they toyed with their little neighbours, failing to piece together anything incisive to give them the lead in the tie. Their conceit would come back and bite them when Dimmer restored Luxembourg’s lead. With a little over twenty minutes to go, the lights began to go out on the Netherlands’ Euro dreams, and those Luxembourgian fans in the crowd would go wild at the final whistle, as their team pulled off a famous win.

In the final qualifying round, Luxembourg were drawn against Denmark, and would play out a thrilling two-legged tie, and earn themselves an unlikely nemesis. A flurry of goals in Luxembourg left the tie in the balance, as the minnows led twice before relying on Henri Klien to earn the draw after a stunning hat-trick from the Danes’ Ole Madsen. Madsen would be at it again in the second leg, equalising Johny Léonard’s opener before giving the hosts the lead, only for Ady Schmit to send the tie to a replay. In Amsterdam, there would be no more chances for the underdogs, as Madsen scored an incredible sixth goal in the tie to seal a 1-0 victory for the Danes, earning them a place at the Euro 64 finals.

Sadly Luxembourg wouldn’t take this form into their next qualifying campaign, losing six out of six in their bid to make the 1966 World Cup. They’ve never come as close to a major tournament as they did in ’64, but with their current crop of talented players making waves in the UEFA Nations League, it mightn’t be too long before we see The Red Lions giving bloody noses to the big boys.