Skip to content
Posted on December 30, 2019 by That's Liquid Football

All good things must come to an end and, as proven by the final knockings of this absolute binfire of a decade, all bad things must too. The 2010s have been tumultuous, with worldwide divisions and fractious tribalism spurred on by the rise of social media and a loss of trust in our mainstream news providers, it may well be remembered as the era that mankind entered the ticket hall of history and purchased a seat for the one-way express service to Oblivion.

Still, while the world literally burns and society rots from its very core, there are always the little things to help us get by. A sentiment never better expressed than by this week’s guest on Losing My Favourite Game. Mat Hodgson is a sports documentary maker and the founder of Ad Hoc Films, and is perhaps best known for being the brains behind The Four Year Plan, the incredible 2011 documentary that charted Queens Park Rangers’ rise from the brink of bankruptcy to the Premier League.

Here, Mat talks candidly and passionately about his love for Sheffield Wednesday, the grief of losing his father, and the fickleness of fate in football, all encapsulated by one sunny afternoon at Wembley. 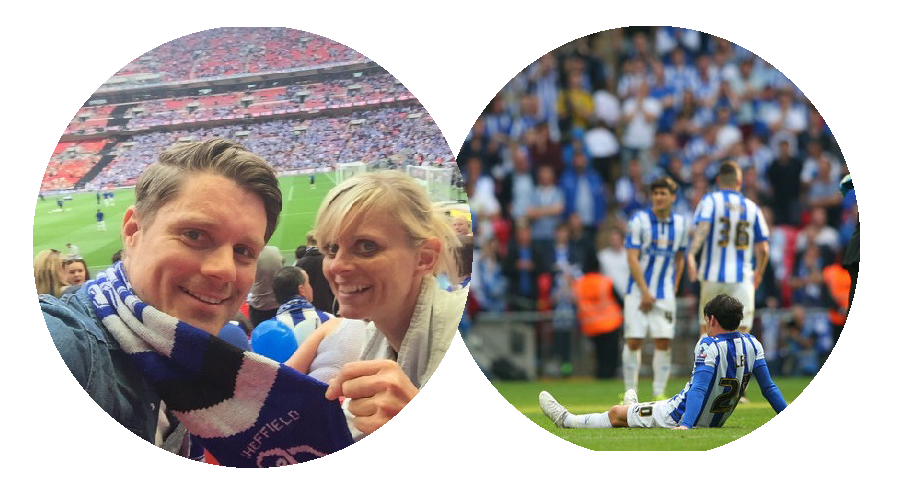 When I was asked by That’s Liquid Football to write about a loss that really sticks with me, several occasions sprung forward into my mind. You see, I’m a Sheffield Wednesday fan, and other than some relative success in the early 90’s (winning the League Cup, reaching an FA Cup final, finishing third in the top flight) things have been pretty barren for the majority of my life following those times. It certainly means the victories stand out more due to their rarity. But if I dig deep, the losses are there and their scars remain!

I support Sheffield Wednesday because of one man: my father. He always gave me freedom to choose whichever team I wanted, but that made me want to join him in his allegiance even more. A bond was formed when I saw them first aged 6. I became obsessive and probably made my dad wonder if he had done the right thing in introducing me to the Owls, such was my fanaticism.

Some of my happiest memories with my father are watching Wednesday. Actually the most enjoyable seasons were the 2 when we were down in the third tier of English football, in League One. We went to more games during that period together than ever before or since. It just mattered more. And of course I’ll always treasure the day in 2005 when we travelled to Cardiff and saw us victorious in the play-off final that saw us promoted back to the Championship.

Dad became really unwell in 2012. Every time I saw him during his illness his first question was always regarding the latest Wednesday result. The club and supporting it had provided an impenetrable glue. He passed away in 2013, buried with a Sheffield Wednesday pennant.

Life of course goes on, and no more so than in football. In 2015 Wednesday began to show signs of resurgence following a few years of mediocrity. Carlos Carvahal was at the helm and there was a sparkle and charisma to the club and its football. We went on a fabulous run. I was going to several games on my own and enjoying my days as part of the Wednesday family. At times I even took my girlfriend, who respectfully understood the significance of maintaining the connection to the club for me.

And then things really began to click in 2016. I got engaged and we made the play-off final all in the same month. This was gonna be my year! Right!?

I managed to get two tickets to the final against Hull City, and asked my sister to join me. This was going to be my late father’s moment in the sun – seen through the eyes of his son and daughter. We went representing him more than anything. All day he was at the forefront of our minds. We sang the songs, we hugged regularly, we felt something was carrying us all day…

Football does romanticism, football does fate, football does ‘written in the stars’ but for every one of these moments to come true there has to be an alternate universe where the opposite is playing out. A negative to balance the positive. Wednesday were utterly outplayed at Wembley that day. It was as comprehensive a 1-0 as you’re likey to see. I’m sure there were hundreds, even thousands of Hull City fans that day with equal claim to a romantic and emotional happy ending. They had their day. And I can’t complain, because this is football and this is life. But I was distraught. It felt personal and I was heartbroken for my dad, for my sister and for myself. I cried at the final whistle – tears that, upon reflection, were a build up of grief and the hope that had been expanding within me throughout the whole season. It all just came to a head as I sat slumped on a plastic seat in North London, head in hands with my sister’s comforting arms around me.

A loss can of course hurt, especially when you come so close. I don’t think Wednesday have ever really recovered or been able to properly build upon the momentum of that season since. But a loss can also, strangely, be a badge of honour. That’s how I look back to that day. I wanted us to win SO badly for many reasons, but taking it on the chin is important and I know the deal I made with Wednesday all those years back. It was never gonna be an easy ride, never unfettered glory, but it would always be personal to me.

I remember meeting a QPR fan who made his son support Arsenal (when they were winning titles) as he didn’t want him growing up experiencing failure. I thought that was one of the most pathetic things I’d ever heard (and totally contradictory to most QPR fans I’ve come to know, who believe in the ‘through thick and thin’ mantra of proper football fans). It was like treachery… cheating. What’s the point in just taking the easy option!? Football is bigger than that – and it translates to life. Supporting a club can teach you so much about life and how to deal with eventualities it throws at you. Sure you want the good times, but you ultimately learn more from a loss. It crystalises your emotional connection to the club, and serves to make your resolve and will even stronger. So I’ve learned to embrace the losses as well as the victories, because both matter.

Plus… there’s always next season right!?

Massive thanks to Mat for sharing such a personal account of his heartbreaking afternoon at Wembley. You can follow Mat on Twitter, and watch the excellent Four Year Plan here.